IF for Health and wellbeing

Partnership for health and weight loss

Over the last few years I have been working along side clients to help them manage their Type 2 diabetes, pre-diabetes or issues with weight loss. IF has provided a platform with which I can make a significant difference to many peoples lives and have had some amazing success stories from my last year of work.

Early in 2019 I began working with a client with a long term history of poorly controlled Type 2 Diabetes. He is on maximum doses of oral medications and has been on insulin for the last year. When we first started IF, his Liver Function tests were abnormal also and he is overweight. His HbA1c was 91 on first meeting with me and weight 125kgs. After 2.5 months of intermittent fasting starting at 16:8 but quickly moved to 18:6, his HbA1c has reduced to 88, his LFT's were back within the normal range (ALT and Alk.Phosphatase had been elevated) and he has lost 5kgs. He was incredibly thankful for the time I spent with him as felt his previous nurse and GP had simply "thrown medication at me" without any input into managing better or reducing health risks. He also stated that he has a clarity and energy he hasn't had in years.
Another male, 40yrs old, diagnosed with Type 2 diabetes in April 2019 with an HbA1c of 100. I started him on an IF schedule of 16:8 and he was commenced on Metformin 1000mg BD. 3 months after starting IF, he returned for his follow-up and had an HbA1c of 46. He has essentially almost reversed his T2D. Working with his GP, we reduced his metformin to 500mg BD and will repeat his bloods in 3months. His BSL's are currently stable (around 6-7) with his 16:8 schedule.
In the 3 months he lost 8kgs and is now a normal body weight, but, most importantly, he feels phenomenal.
​
In September 2019 I started working with a 30yr old newly diagnosed Type 2 Diabetic.   When I first met with him, his weight was 123.1kgs which gave him a BMI of 40.9 and his HbA1c was at 51.  He started fasting on the 21st of September 19 with 16:8hrs clean fast and quickly moved to 18:6 and then 20:4hrs (one meal a day and sometimes a snack before or after the meal).  On the 18th of October (1 month of fasting) he had lost 8kgs and reported feeling good with more energy.
His next review on the 17th December 2019 (2months of fasting one meal a day), this patients HbA1c was now 39 putting him back into normal range.  At review in January 2020, he continues with his 20:4hrs fasting and now weighs 104kgs (a loss of 19.1kgs) with a BMI of 34.5
Another Type 2 diabetic with a weight of 153.4kgs started fasting in October 2019.   His HbA1c was 77 and he is on Metformin TDS and Gliclazide.  His waist circumference was 147.0cms.  He started fasting on a 16:8 schedule with a decent meal at lunch and his dinner consists of only raw veggies.  After 4 months of fasting he has lost 32.4kgs bringing him to a new low of 121kgs and he has lost 18cms off his waist circumference.  His HbA1c has dropped to 38 so his GP has taken him off Metformin and Gliclazide and he is now on 1 dose of Vildagliptin with a view to stop this should his HbA1c remain in the normal range.

In 2020 I started working with a patient who had a 15year history of T2D.  His HbA1c was 108, he was on insulin, Galvumet and gliclazide.  He went straight to OMAD (one meal a day) fasting at least 20hrs daily.  After 2.5months of fasting, his HbA1c had dropped to 67 (almost half) and his weight was down 3kgs from 118 to 115kgs.  After 6months of fasting, we stopped his insulin as his Blood sugars were down to 5-8mmol and by 8 months his HbA1c was now at 48, pre diabetic range.  We stopped all his medications.  He continues fasting daily with Blood sugars between 5-7 (normal) and he has so far lost 13kgs with his weight at 105 currently.

"I would like to thank Sarah Kull so much for her time and effort that she put into the IF intensive course that I have just completed. Sarah was so helpful and nothing was ever a bother. It was great everyday having an exercise routine that was quick and easy along with a different topic on IF. The course was very informative and motivating and I found it so easy to stick to, it’s not hard at all. So pleased I came across Sarah’s IF page and started this journey. Thank you Sarah 😄. Wendy"


“I don’t get hungry, don’t have to watch what I eat, just have to eat in my window of 6hrs or 4hrs. Get full on less. Don’t feel bloated. Don’t really feel like I’ve lost a lot (about 12kgs) but can get into clothes 2 sizes down which is nice. Like the idea that while fasting my body is working on healing instead of having to constantly process food. A bonus is less spent on food also.” - Clare Schreuder 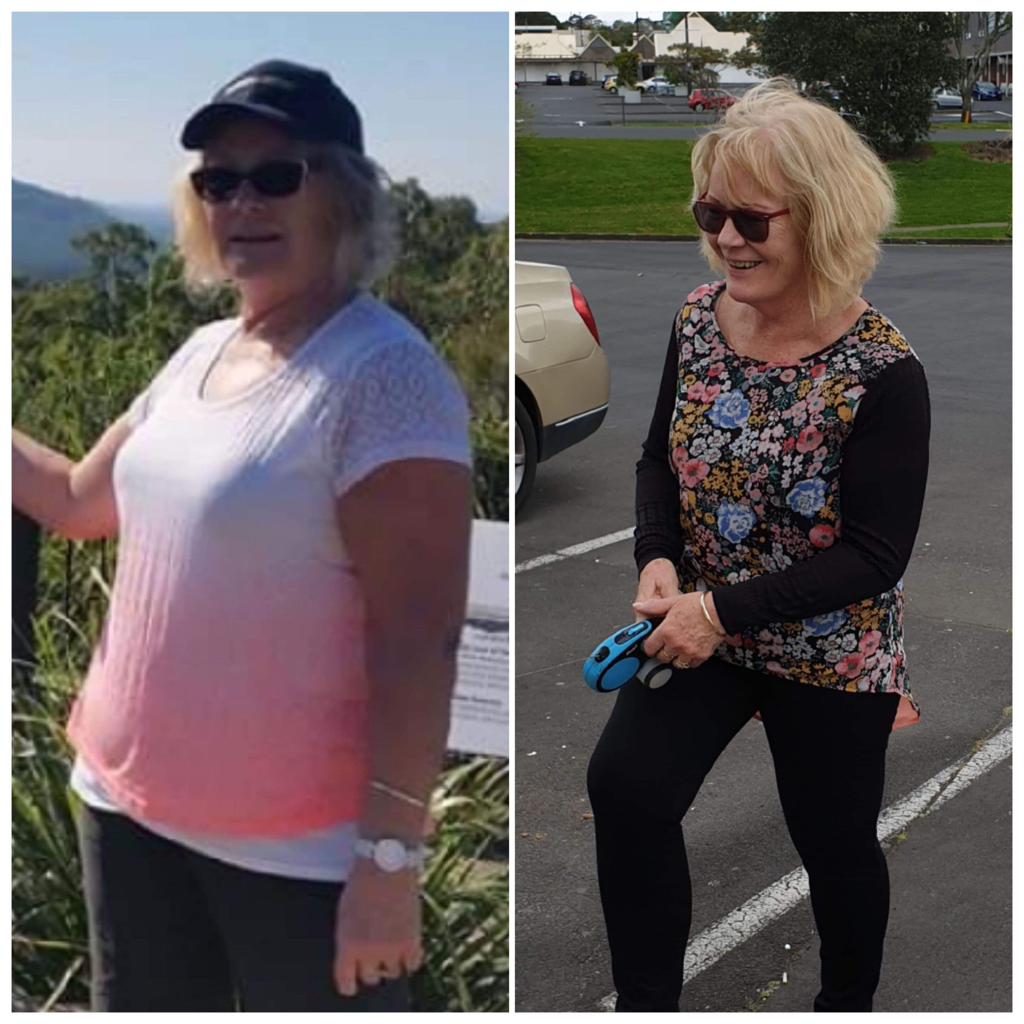 16 months Fasting - 12kgs and down 2 clothing sizes
“Went for another round of blood work to check on my HbA1c after 3 months doing IF. Down 10 points from 55 in May to 45 in
August. Diabetic nurse and my GP are blown away! Bonus 4kg weight loss over this period, thank you
Sarah Kull!” - Heather Anderson
“I broke my leg at the end of 2018. It was a significant injury requiring surgery and metal pins and plate to my tibia and fibula. Needless to say I rapidly gained 5kg from immobility combined with emotional eating. Furthermore I was already a good 5+kgs over weight. I had tried Keto and Paelo and found both options unsuitable as I simply wasn’t prepared to quit certain favourite food types. I invariably gave up, binge ate and gained another kilo.
I started reading things about fasting in the media and my physiotherapist kept harping on about how magical it was. I didn’t want to commit. It sounded terrifying. Not eat? When? Why? How? I decided to look on Facebook and came across Sarah’s group some time in April 2019. I immediately asked to join and at first felt clueless. I had no idea what the terminology was, like OMAD and IF...let alone Autophagy! I can happily say I’m now a disciple in my late 60’s. It’s tough at that age but I can do it. I’ve lost over 5kgs. I sleep loads better. I don’t get stomach aches anymore and feel younger! My broken leg is healing and I hope to start an exercise regime soon over and above the aquarobics which I love. People have commented on my weight loss and how refreshed I look! Thank you Sarah for your support and encouragement as well as knowledge. It’s a lovely group, Thank you!” - Eve Macaskill Hemming
​
"Always thought my life with weight loss would be by way of an organised weekly meeting. When I moved into the IF family and the NZ Intermittent Fasting - Freedom from diets face book group I never considered the freedom this lifestyle would offer. The benefits and continuous support and inspiration from the facebook group and yourself as co-ordinator is amazing. Thank you Sarah! " - Elaine Irvine
"I am in love with this way of life. After Sarah introduced me to her website after sharing her success with IF I decided to have a look. I couldn't really believe this would work no other points or calorie based diet had since having my gallbladder removed in 2012 I had gained back 30 kgs of the 60 I had lost and with them my bad eating habits and excessive grazing had returned. My eating was out of control and I thought my next option was weight loss surgery. My husband did and still does not think weight loss surgery is the answer and really encouraged me to give IF a go. Minimum it would help me have some control over my eating. I started with high hopes and very skeptical about what was to come. Well low and behold it was easy I didn't feel starved or faint or light headed. I felt in control and far less hungry than I thought I would. My mental clarity returned and I actually felt less foggy even on minimal sleep being a mum to 2 very young children. 8 weeks on and I feel so much better about my eating and my appetite has begun to correct itself. I dont binge eat anymore and I feel fuller after far smaller portions but most importantly I have control over my eating something I so desperately needed and wanted. Weight loss surgery is no longer and option to me. I'm not perfect and I am still working out what works best for me but this is my way of life now." - Vic Everett

3 months of IF and some significant changes as these face to face photos show.
Powered by